Blessed is he that comes in the name of the Lord. Hosanna in the highest.

As today we recall the triumphal entry of the Prince of Peace into the holy city, riding on the donkey, we join in faith with those who cried hosanna and laid the palm branches in his path, to praise and bless him.

We bow before almighty God acknowledging our unworthiness of all that his Son has done for us. He came to reveal his Father’s love and to show us the true way of life. Yet we have rejected that love and have strayed from the way so often. On this day Jesus demonstrated his kingly right and revealed his glory. While we might offer him the homage of our lips, we fail to give the loyalty of our lives. Instead, we live in selfishness and refuse the way of service. Have mercy upon us. Move us to true repentance that we might turn again to our God to receive through his Son the forgiveness we crave.

Help us in the days that lie before us to enter into the secret place of the most high. Let the noise of the world be hushed that we might hear the still small voice that seeks to lead us back to God. Teach us to glory in the cross of Christ, to lay down our life that we might find it again and bring us into the fellowship of that love that endured the cross, despising the shame. So, may we at last faithfully follow his blessed example and through Christ find the path to eternal life.

Our Father which art in heaven, Hallowed be thy name. Thy kingdom come. Thy will be done in earth, as it is in heaven. Give us this day our daily bread. And forgive us our debts as we forgive our debtors. And lead us not into temptation, but deliver us from evil: For thine is the kingdom, the power and the glory, forever. Amen

A thought for today

Palm Sunday marks the end of Lent and the start of Holy Week. It is the day that commemorates the triumphal entry into Jerusalem. As we look back to what happened that day we might think that Jesus was either exceptionally brave or foolhardy, for he was placing himself into the hands of his enemies. While he remained in Galilee his opponents were too afraid to take action because of the popular support Jesus enjoyed. In Jerusalem things were different.

At first it did appear that many not only welcomed him but supported him, but as the following week unfolded that support drained away. There were many reasons for this. Perhaps the most significant was that their expectations were not fulfilled.

We have to set the events of Palm Sunday against the background of the times. For almost half a century Palestine had been under Roman rule. Attempts had been made at rebellion but had been brutally crushed by the Roman legions. The only hope of freedom seemed to lie in the coming of the messiah. According to tradition the messiah would be a mighty warrior who would use his God given powers to destroy the enemies of God’s people and make them the rulers of the world.

Though Jesus had never made any claim to such power, many believed that his miraculous powers were proof that he was the messiah sent by God. When he came to Jerusalem they welcomed him and yet though they saw what he did they failed to understand. What happened that day should have seemed familiar. When we read the two passages set for us today the similarity should be obvious. Zechariah tells us the king comes riding on a donkey, in Mark Jesus rides into the city on a donkey. So far so good. But with their greater knowledge of Zechariah the people ought to have seen more than Jesus’ claim to be king. No king ever went to war on a donkey, but he did ride one to show that he came in peace. In other words, that day Jesus rejected the traditional view of the messiah as a warrior king.

As events unfolded during the week that followed it gradually dawned on everyone that Jesus was not what they wanted him to be. By the end of the week the crowd that had greeted him felt let down and were easily manipulated by the authorities to demand that Jesus be condemned.

It is all a clear reminder of the danger of trying to make Jesus what we should like him to be. He is what he is and we have to accept him for what he is. That, of course, is what the Pharisees could not do. All through his ministry Jesus had made good his claim to be the Son of God. He had offered his miracles as proof, yet they had rejected it all as blasphemy. They even accused him of being in league with the devil when he cast out evil spirits and did not stop to wonder why the devil would act against himself. In the end with the aid of the crowd they persuaded Pilate to condemn him. All because they had made up their minds that Jesus did not conform to their way of thinking.

The temptation to think that we know best is as great as ever. This is not just true in matters of religion but holds good in everyday life. As we move nearer to being able to bring the pandemic under control the danger of thinking we do know what is best for ourselves is growing greater and greater. We only have to look to the continent to see how precarious our situation could be. The delays in the rollout of vaccines and the apparently inherent vaccine scepticism have led to the emergence of a third wave of infection. It is likely that only the success of the vaccination programme here can protect us from the consequences of the blatant breaches of the restrictions on large gatherings that we have witnessed over recent weeks.

Yes, there are signs of lockdown fatigue, but we are not out of the woods yet. It still matters that we turn away from doing just as we like. A little patience now will prevent great regret in the future.

It is understandable that we are highly critical of the Jewish Authorities, but much of that is result of hindsight. It is worth remembering that if it had not been for the Cross there would have been no Easter and that would have meant that we were now truly on our own as we face the consequences of the pandemic. What will bring us through is the recognition that through our faith we know that we are not alone in all this for God goes with us, giving us the strength to turn away from selfishness. We can see the truth of this in the way so many have reached out in different ways to offer help and support. If it can be said that good has come out of the pandemic this surely is it.

It is only right that today we should give thanks that our Lord entered into Jerusalem on a donkey to fulfil the prophecy of Zechariah to show that he came as the Prince of Peace. As those who welcomed him that day spread their palm branches before him, so may we lay at his feet all that we have and are. We remember with gratitude all that followed in the week we now know as Holy Week, especially that for us he went to the cross to win our salvation. Truly we give to you all praise and thanks this day.

Help us now to think and to pray for a world that is in need of your aid. O God whose son entered Jerusalem as the King of Peace, reconcile your children to one another and to yourself, that there may be an end to war and fighting among them.

Eternal Father whose Son did your will with no thought for himself, fill the Church with your Spirit that she might work tirelessly for the advance of the Kingdom and shed the light of the love of God clearly in the world.

Bless our country and people. Inspire and uphold all who are in authority amongst us. Give us patience that we might continue on the road that will take us out of the pandemic. Strengthen us that we as a nation and people might resist the temptation to relax our vigilance too soon. Pour out your blessing on all who administer the vaccines and encourage everyone to take it when their turn comes.

Merciful father, you are ever ready to give comfort in trouble or distress. Give cheer and healing to the sick. Strengthen those who seek to care for them. Be with those troubled in mind and spirit that they may know your peace. Bring comfort to those who mourn.

Hear our prayers and answer them for the sake of him who bore our griefs and carried our sorrows, even Jesus Christ our Lord.

The grace of the Lord Jesus Christ, the love of God and the fellowship of the Holy Spirit be with us all now and evermore. 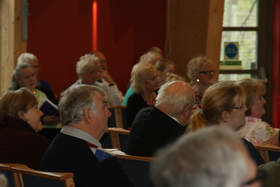